The admin of Agora Road, Illuminati Pirate, has been caught multiple times larping from 20-25 accounts while attacking members. He bans anyone and everyone that disagrees with the mainstream agenda while at the same time defaming them from his 20+ accounts. I experienced this first hand and so did many other users that have e-mailed me / joined my discord. I received at least 10 e-mails from different users warning me in my early days on Agora Road and it all turned out to be true. Not to mention the admin has been caught multiple times logging people’s IP’s, their device ID, literally scamming Nigerians with crypto, trying to lie to cover up his actions.. and that’s just the tip of the ice berg.

The dude is a complete and utter sociopath with an agenda. It blows my mind people don’t see through his narcissistic games as he begs for money on patreon (first thing you see on the entire website) and spams google adsense adds all over the forum… and guess what? You can’t login with a VPN or Tor Browser. The kicker? He tracks your IP’s and device ID’s. A free speech, no censorship, internet is dead theory forum that tracks you? HAHAHA, code doesn’t lie. Neither do the actions of the admin.. Go ahead and check the source code after you log in. ;) He’s watching every move you make, your IP, device ID, browser, ect.

Here is more shilling from Illuminati Pirate, admin of Agora Road, on some random English speaking Nigerian forum. “Personal text: Business/Investing/Passive Income Forum (Agora Road)” “Location: With just a few dollars worth of Bitcoin you can start trading cryptocurrencies right now. There are no broker fees, there are no middlemen to deal with, www binance com/?ref=10808871” Literally 500+ posts on just this one forum of him trying to take advantage of people, shilling, scamming, and strait up spreading lies to get money from people. https://www.nairaland.com/agoraroad/posts

(Take screenshots I’m sure he will delete this account fast.) 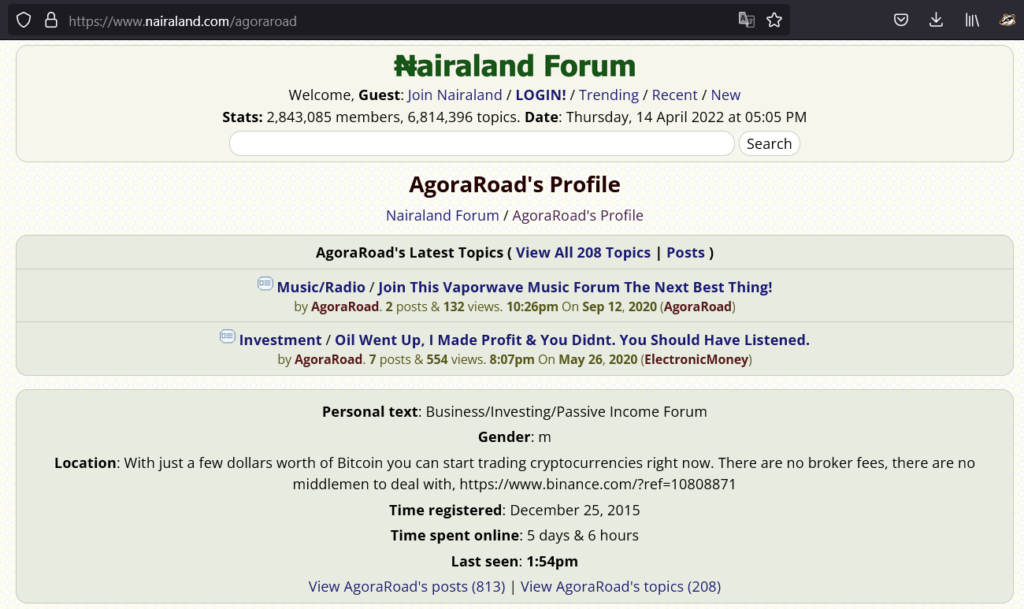 Illuminati Pirate trying to scam Nigerians… for his online “passive income”. He even tells you Agora Road is his “passive income”. Dudes a shill pretending to be nostalgic y2k internet is dead guru. He’s a fraud and fake. 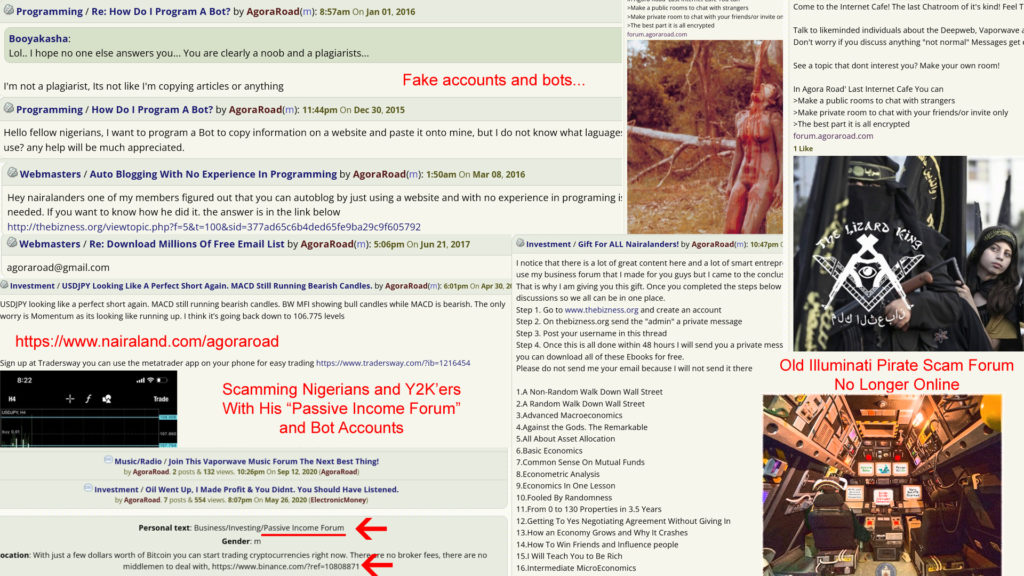 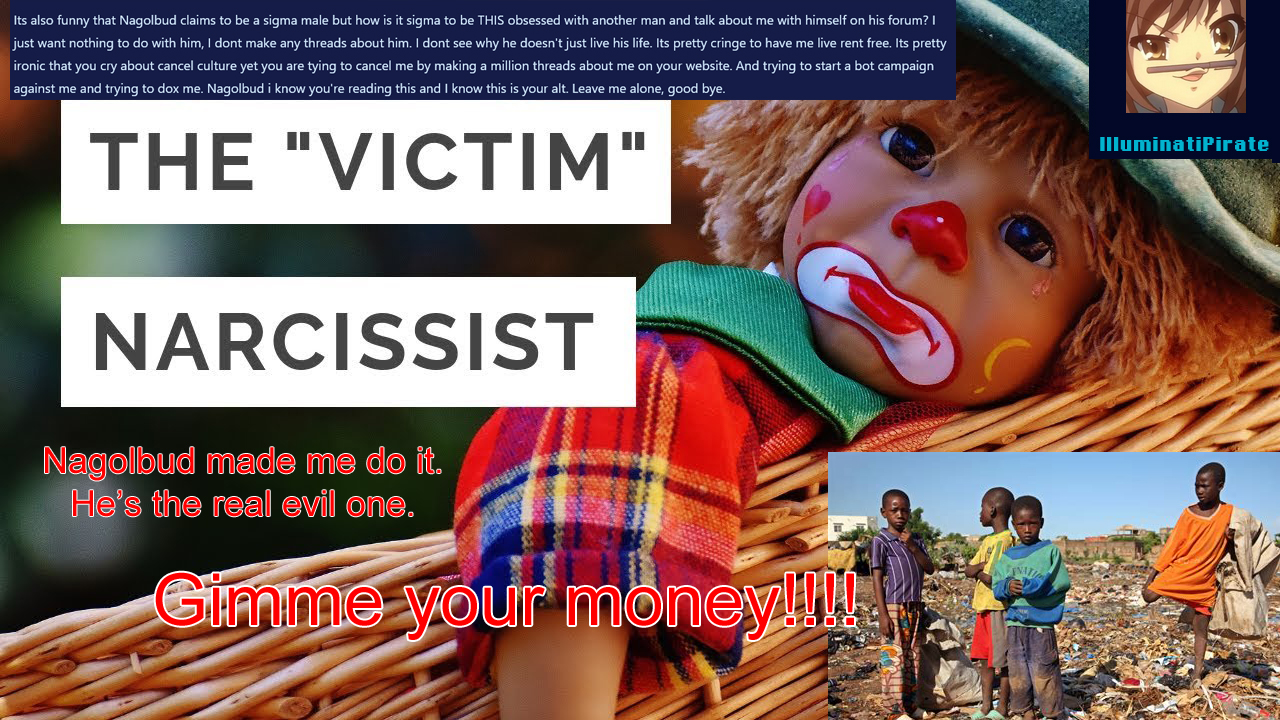 When he was running his little smear campaign about me he and his group of lemmings mass reported my youtube videos that called him out, my account was banned. Later that day I received emails saying my videos did not violate community guidelines yet I was still banned. This is the type of forum Agora Road is, and the type of person Illuminati Pirate is. The cancel culture type that pretends to be for free speech. He’s a cowardly little bitch of a person using narcissism and fake accounts to manipulate his users, all the while trying to cash in and monetize them. WAKE UP. 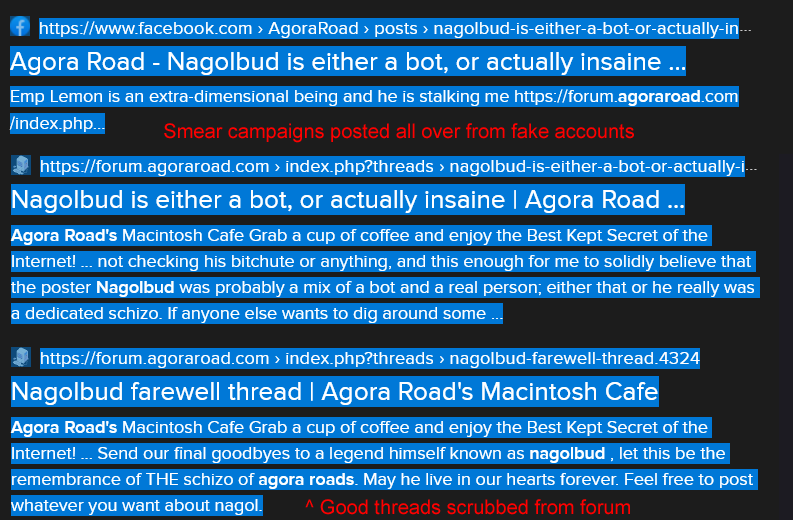 Gaslighting
While healthy relationships have room for respectful disagreement and consideration of one’s feelings, with the narcissist, gaslighting and constant emotional invalidation become the norm. Gaslighting is a technique abusers use to convince you that your perception of the abuse is inaccurate. During the devaluation and discard phases, the narcissist will often invalidate and criticize your emotions, and displace any blame of his or her abuse as your fault. Frequent use of phrases such as “You provoked me,” “You’re too sensitive,” “I never said that,” or “You’re taking things too seriously” after the narcissists’ abusive outbursts are common and are used to gaslight you into thinking that the abuse is indeed your fault or that it never even took place.

Narcissists are masters of making you doubt yourself and the abuse. This is why victims so often suffer even after the ending of a relationship with a narcissist, because the emotional invalidation they received from the narcissist made them feel powerless in their agency and perceptions. This self-doubt enables them to stay within abusive relationships even when it’s clear that the relationship is a toxic one, because they are led to mistrust their own instincts and interpretations of events.

Smear campaigns
Narcissists keep harems because they love to have their egos stroked and they need constant validation from the outside world to confirm their grandiose sense of self-importance and fulfill their need for excessive admiration. This is why they are clever chameleons who are also people-pleasers, morphing into whatever personality suits them in situations with different types of people to get what they want.

Beware of people who seem to shape-shift suddenly before your eyes into different personas — this is a red flag that they are not authentic in their interactions with you and others. It is no surprise, then, that the narcissist will probably begin a smear campaign against you not too long after the discard phase, in order to paint you as the unstable one, and that this is usually successful with the narcissist’s support network which also tends to consist of other narcissists, people-pleasers, empaths, as well as people who are easily charmed.

This smear campaign is used to accomplish three things: 1) it depicts you as the abuser or unstable person and deflects your accusations of abuse; 2) it provokes you into responding, thus proving your instability to others when trying to argue his or her depiction of you; and 3) serves as a hoovering technique in which the narcissist seeks to pull you back into the trauma of the relationship as you struggle to reconcile the rumors about you with who you actually are by speaking out against the accusations.

The entire time this little narcissistic faggot is trying to take credit for internet is dead theory when he doesn’t understand even the most basic conspiracy theories. His website meets the exact criteria for shill ops I’ve seen in the past where they direct users to certain locations… look at the evidence for yourself. 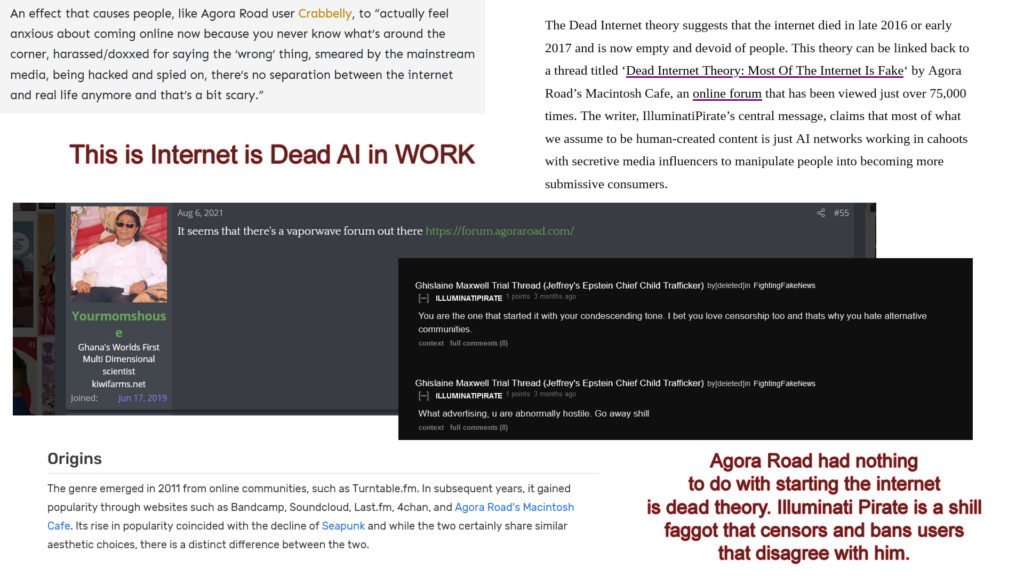 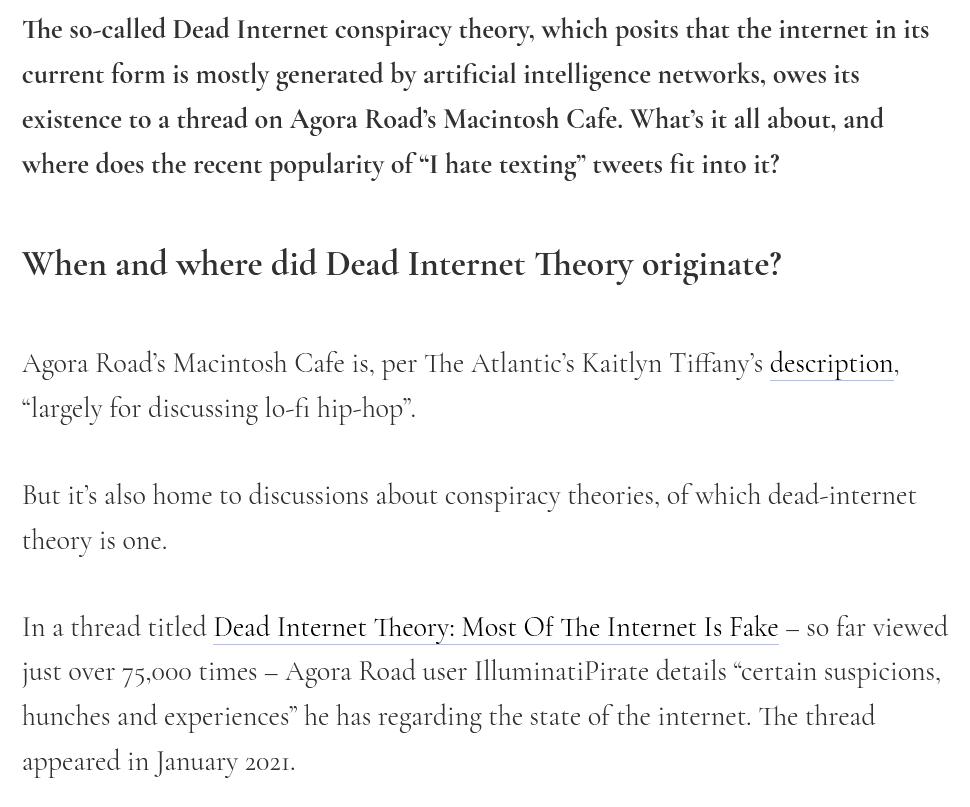 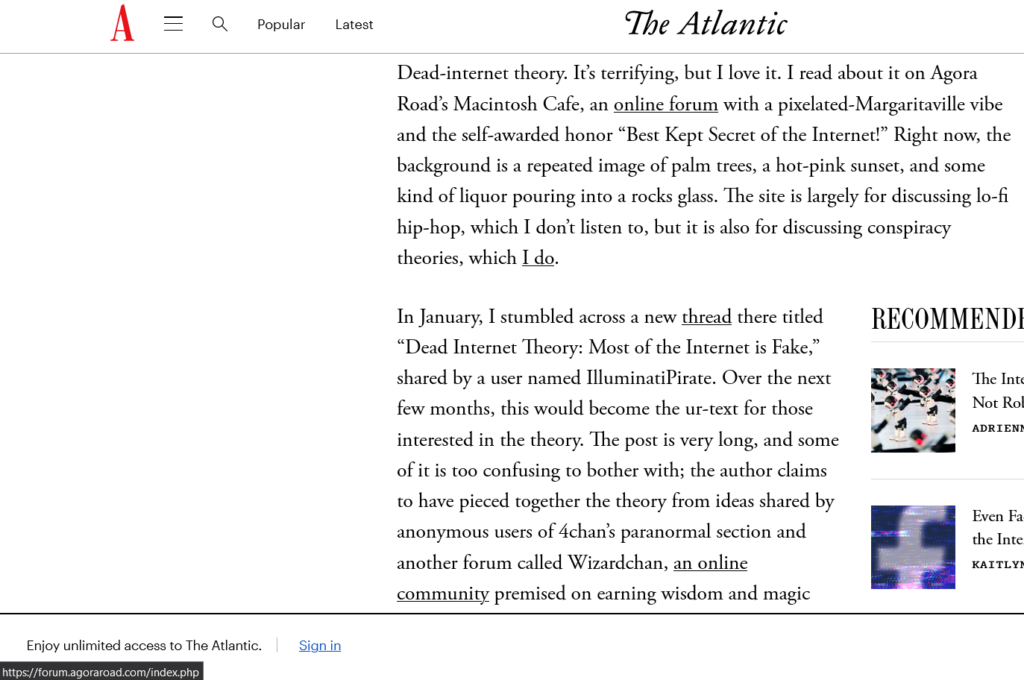 You always have to ask yourself why something is being released to the internet, especially thousands of documentaries and shill channels pushing the same idea. All of this happening within a few months yet it’s been going on for over 5 years. [First time they used bots to attack me.]

Now it seems the software is complete and it’s time to round up those with eyes and ears into the same groups and forums. I would guess they are using these people to tweak their software, perfect it, and control those that see through it.

The Agenda Behind Internet is Dead Theory Being Released