Anyone else tired of leftist douche bags using positions of power to push their ideology? I don’t even live in the USA anymore and completely understand the left vs right political paradigm yet these retards cling to their media made opinions. Gaming is one of the last outlets of creativity left in the world yet even here they’ve put their grubby little social justice warrior goo all over it. Low IQ beta males defending the very system that mocks them while silencing anyone with a different opinion. YOU ARE FUCKING PATHETIC AND WEAK. Just go put ona fucking dress, wear your mouth cover, and get your vaccine.

I’ma post this here because the low IQ community managers will probably ban me for this post as well.

They did delete the post.. this is how fragile their egos over at Due Process. 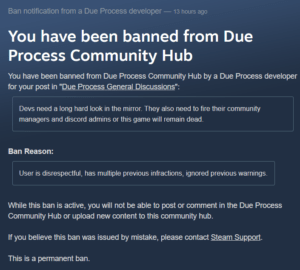 “TLDR: Darby is a douche bag. No one likes him yet he’s community manager. Kill your game harder Due Process dev team.”

It’s not hate speech just because you’re offended by what I say.

Of course I was fine with the game until they banned me to virtue signal their ideology. The problem is not the game but people like Darby that have a habit of banning people for stupid things like STEAM NAMES or trolling on the map or chat. Dude’s obviously not even a gamer. And no, there is no difference between liberals and leftists at this point. All of your opinions are media made and rely on playing victim as you dish out passive aggressive toxicity.

I do see it from the devs perspective. This is by far the dumbest reason to ban your player base.. there are hundreds of other games that don’t cry or ban their player base for these reasons and they are far more popular. Rust is a perfect example of people writing ridiculous things all over the game and no one cares. Grow up. The funny part is this virtue signaling has done nothing but kill the game. I wonder whats worse, a bunch of BASED reviews from gamers getting banned for stupid reasons or an angry SJW website saying negative things about Due Process.

Men like me enjoy talking about topics that matter, I don’t watch sports, I don’t care about Netflix, I want to talk about real subjects. If you don’t like it, mute me in game, but to ban me over some low IQ **** because some toxic cry baby was offended and goes off in discord… The funny part about that is the dudes who “reported” me refunded the game even after I was banned. They didn’t even care about the topic they were just trolling but Darby couldn’t figure that out before he started calling me “homophobic”.

I don’t need advice from people that are scared to speak their mind.. it’s funny you think I need your advice. I’ve been talking about things like this my entire life and in every country I’ve been to they appreciate good conversation. But tell me more about how Due Process is going to change my ideology to their leftist political correctness just to play a dead FPS. All you’ll do is destroy the player base more. Americans are the only ones crying about words on the internet.

75% of the ACTIVE community is on my friends list and they agree with me. There is only a small minority (in power) that think like this and push THEIR ideology through the game with the threat of banning you. It’s weak minded, pathetic, and you should be ashamed of yourself.. but this is the result of political correctness. Creativity dies and so will your community. Go ahead and ban me again Darby, everyone know’s its you. I’ve literally got 15+ screenshots from people that have been banned for ridiculously stupid reasons. In reality, you are the one that needs to be banned for using your toxic ideology as a threat, in a game where you kill people and blow up gas bombs.. like wtf?!

IF Darby is removed and you let gamers mute other gamers as they please, this game grows. Darby banning everyone for anything, this game is dead. That’s reality. You’ve already lost a lot of gamers that were promoting this game to grow it.. when people like Darby don’t do anything, don’t even play the game, yet they have power to ban everyone and anyone as he see’s fit while he literally stalks people from discord watching their every move in game. In reality, his toxic lack of discernment and zealous toxic judgement throwing out accusations like homophobic, bigot, racist, ect. is absolutely far more disrespectful than anything these people are getting banned for.

Rant over. Good luck with the game. Plenty of FPS games out there that don’t act like this and actually have a playerbase. Coming from a place like Mexico, where we literally yell m a r i c o n to each other as a greeting in the street (including the gay men) we simply laugh at your political correctness. You are pathetic. Like seriously pathetic. – Nagolbud OUT

P.S. Random leftists making low IQ comments, that’s exactly what a beta would say. Why don’t you work on your sigma grindset instead. 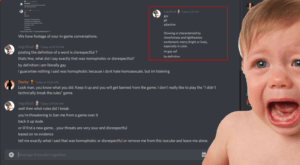