If you’ve been on YouTube for any length of time I’m sure you’ve at least heard about the GTA:V role playing servers to some degree. With the right creative people they can be extremely fun to play in with very rewarding comedy interactions. Yet with the wrong people, they can be quite devastating and depressing. Many unable to role play due to ego and pride, spoiling the fun of others when they can’t win the immediate prize. Lacking the creativity to make it fun they set out to ruin others enjoyment. The atmosphere and environment depending on the server admins and their response to rule breaking and server setup is the name of the game.

When it comes to servers like No Pixel, NoPixel.net, it’s easy to see the scam they’ve laid out for the average gamer. As they collect donations for applications you realize how they’ve roped in the Twitch gamer with a few popular streamers. Many fail to realize the ruse at hand and how deceptive they really are. As No Pixel claims it requires $10,000 a month to run their server it becomes easier to see their manipulation. I mean really? You’re either extremely stupid over paying for a server or you’re a straight up liar cashing in on the Twitch audience trying to play with their favorite content creator. Who spends $10,000 starting up a server to begin with unless there is a shady back end deal with some Twitch streamers? Who would front a monthly $10,000 bill for years with no return? It’s just not realistic in anyway. There is no fucking way you have paid $480,000 in the last 4 years for a FUCKING Grand Theft Auto server.

As Koil is posting pictures of his brand new cars and hot tubs, the illusioned Twitch gamer is padding his Paypal account with more donations. When you look at how many terrible role players are on the server compared to the actual good ones you might begin to see the pattern. Comparing hosting costs with other providers that offer “Insane DDOS Protection” as Koil would say, with server specs ridiculously higher than what would be needed to run this game server for roughly $200-$400 a month; Foil, his chick, and his band of simps are liars. Plain and simple.

The ticket to getting whitelisted on this GTA:V role playing server is giving a fat donation, being a popular streamer, or being a gamer girl as that will surely get you the position. Regardless of role playing skills and creativity the theme of this seems to be the attraction. The Karen cops are the worst as they get offended by everything using their army of simps to ruin the role play of everyone in the vicinity. Did I mention each streamer they allow on the server brings another huge audience of illusioned gamers donating for an application at the chance to play with their favorite entertainer?

After hearing about the drama from yet another meta / power gaming Twitch streamer and seeing No Pixel’s blatant lies about spending $10,000 a month on server costs I thought I’d cement my accusations by applying first hand. After seeing the excuses they produce after giving them a dose of a creativity it’s easy to see your average Twitch gamer has no chance. With years of role playing, creative writing, and story making; the average role player and gamer will be turned away at first glance. Koil’s girlfriend Arachnea, or Penta, however you pronounce it, recently posted a fake screenshot with no date or information from an alleged $10,000 a month server cost. When you look over the document it’s easy to see it’s a fraud.. As you can see in the photo there are no dates, whether this is yearly or monthly billing, what services are being run and used on this server.. literally nothing. This is something you would post to mislead people with no real information or details.

This image has since been removed from her Twitter.

I’ve run my own servers before and even a server like No Pixel’s would never require $10,000k a month to run.. unless of course you were trying to pedal a scam to continue the growth of your Paypal account. Clearly this chick isn’t ready to lose her free meal ticket and willing to mislead the average gamer into the money pit. As their server turns into the Stanford experiment each little dicked cop seems to meta game, power game, and everything in between just to get the “W”. The only win in a roleplaying server comes from good roleplay, fun, and creativity. You don’t WIN in a competitive sense. To many casual gamers bringing their low IQ sweaty tryhard competitive mindset to every game they touch, just fuck off already and go back to your skin casinos like Fortnite and League of Legends.

The last thing I want to mention about all of this is the closed system all of the mods stay hidden under. It would be quite revealing if they released this No Pixel GTA:V server build to the community and everyone realized it only cost $400 maximum to run the server, but that would cut into Foil’s profits. The average gamer could play and create his own server with friends without the drama and douche baggery of the average Twitch streamer. The content would be more entertaining, less meta’ing, and those that just wanted to play with friends would have that ability. Instead, these No Pixel scammers keep their mods locked behind a payment wall. This alone is sketchy as fuck and completely negates the idea of modding and working together as a community to make a game better for everyone. Heck even Vanilla WoW servers were free for over a decade. 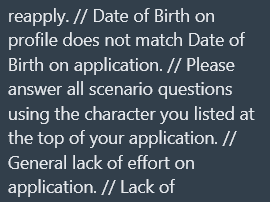 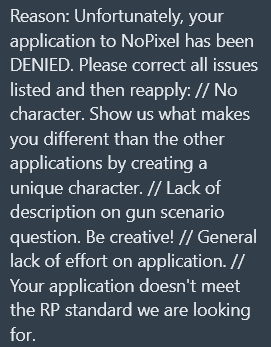 Haha really? Birth date doesn’t match? Lack of effort? These are all blanket statements that mean nothing at all. They are to encourage you to try again, max limit 5, as they reject anyone that doesn’t have a following on Twitch or drop a fat donation to Koil’s Paypal. I’d be offended if this weren’t just a test but in reality I could care less. I just don’t like watching gamers get scammed on by a Mustang driving fag that whines and cries on Twitch when he can’t get the power gaming “role play” he demands. These cucks are terrible at role play as they try and “win” every encounter. They just use their role play character to pad their real life ego and it’s boring as fuck as they chase clout on the internet for some donations.

I’m tired of AAA gaming raping the gamer while these faggot ass clout chasers promote it. As an old school gamer I can hardly sit back and relax as the last remaining modders adopt the monetary strategy of the AAA industry. Fuck these money grubbing devs, modders, and Twitch streamers that are all after the same thing. With your political correctness and self censorship you have destroyed gaming and the creativity it once stood for. And for the fan boys, no, I don’t even have Twitch and could care less about playing with some LGBQ selling out for content every day on the internet. A bunch of cowards scared to say a certain word or phrase for the fear of getting banned. Pussies, fags, feminists, social justice warriors, obese simps and retarded ass potatoes pretending to be gamers for a paycheck as the entire industry collapses. Oh woops did I say a naughty word you cucked out Karen, ask me again if you think I give a fuck.