Trumplodyte Virus Has Been Downloaded and Installed..

Please wait while you are redirected...or Click Here if you do not want to wait.

As I update myself on the current events in the United States it’s a great reminder of why I’ll never return. To clarify, I hate politics. The left vs right paradigm is an obvious ruse used to control and maintain the conformity in the USA and worldwide. Obama, Bush, Clinton, and Trump.. all friends at the end of the day. As they cheers each other with a fancy wine glass and laugh at the masses their acting becomes clear.

As I read the comments in some of these videos as the national guard rolls out in the streets, I can’t help be reminded of the Posse Comitatus Act and how they cleverly left out the national guard. Looking back on history it’s easy to see how this has played out before, as they killed students at Kent State for protesting the war, or the burning down of Wako, or shooting an innocent mother as she held her child at Ruby Ridge.

These pop tart patriots worship their flag and sling it all around, begging the government to send bullets at those on the left. Never stopping to consider this was just another psyop to control the narrative. As they chant the “news is fake” while relying on it for all the information they forget their conscious and critical thinking as they cheer on their own demise. 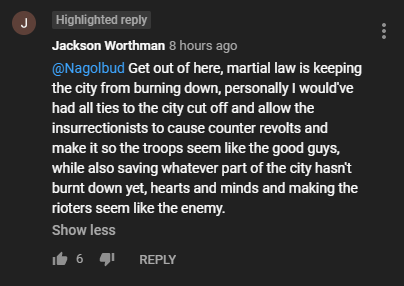 What happens in 4 years when your savior Trump is no more? When an evil communist democrat gets back in office with the powers Trump declared first hand. Will there be a coop or perhaps Trump will declare no more elections. This too will be cheered on by the conservatives to lift up their hero. As this becomes a delusion and the world intervenes these same conservatives will be dancing with their guns in the streets. Those humvees and buses will now be used on you, as your claps turn to violence the streets burn some more. Now that they’ve got all the domestic terrorists and “extremist” locked up or killed, society returns to the boot licking normality you once adored.

No one dares raise their hand or protest in the streets as your masks become more than a security blanket for covid-19. As the working class is silenced they still fail to realize it was them cheering this on. What a shame they didn’t realize it before they were lying in a pool of their own conservative red.