Not often do you hear or see the words together “free range” and “rabbits”. It wouldn’t be feasible in a city environment or even a suburban area but free range rabbits have become one of my favorite critters on the farm despite the few drawbacks. UPDATE: It is feasible in the city and suburban environment. Even on a busy street corner. They are smart little critters.

It all started with 3 meat rabbits. They where kept in rabbit runs with a small hutch in the corner. These proved to be efficient but I had to feed and water daily. Once spring hit I put them together to mate and I had two pregnant females. A few weeks later I adopted a few small kittens for mice control and this made the new mothers quite nervous. They stopped building a nest in the pen and began digging under the fence to escape. I didn’t notice until it was too late. All three rabbits had escaped.

They didn’t go far though; they built a nest close by and had their babies. They continued to do almost the exact same thing in the pen, as out. They would come get some food once in a while but hardly touched their water. I realized quickly how nice it was not having to feed or water them daily or clean their cages.

When I moved into my winter quarters the rabbits moved to that part of the property with me as well. They would steal chicken corn once in a while but mostly still dug in the snow and got their own food. Some move off and do their own thing but most of the new babies stick around. I made them a few habitats on the property compiled of simple brush and tree collections from the property into one huge brush pile. This seems to be their favorite type of home and by far the cheapest for me. 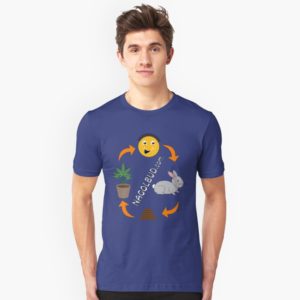 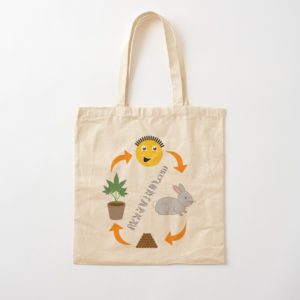 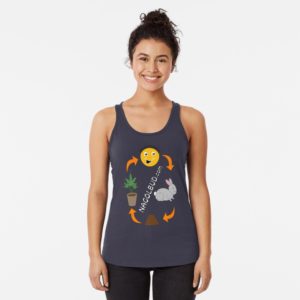 I realized they were far smarter than the cage animals most farmers made them out to be. They have built their own colonies on the property and joined the local eco system using wild birds for predator calls and warnings. I have also noticed the lawn itself is much healthier and any concentrate of rabbit poop generates an overgrowth in that area. I myself have a large dog that does not chase the rabbits so they feel a bit of comfort when he’s out in the field with them. They are capable of thwarting off most predators with their speed and agility but it’s easy enough to take care of anything that gets too curious.

There are however a few downsides to free range rabbits. Rabbits like to DIG. They will dig all over and everywhere. They will dig under your barns and sheds and if they can, move right in. They also create small holes but these seem to cave in with the rain and weather. The biggest problem is really the digging into unwanted places.

This however can be solved with a little extra work. There is a few ways of doing this but the most effective for me, and easiest, was to simply lay down some heavy duty wire fencing about a foot wide along the entire building. I simply covered it with gravel to match the foundation and since then they have not been able to dig in.

Cons aside, I almost forgot to mention the best part about free range rabbits. They work for you. Instead of having to provide food and water mixed with clean cages and fresh shavings, they are out doing this for you. They have babies, bulk up, hang around, all to provide you with the easiest source of meat you will ever have. Harvested with a pellet gun or .22 all that’s left is to clean and cook it!