Every winter, Romans honored the pagan god Saturn with Saturnalia, a festival that began on December 17 and usually ended on or around December 25 with a winter solstice celebration in honor of the beginning of the new solar cycle. The holiday occurred near the winter solstice Saturnalia celebrations and became the source of many of the traditions we now associate with Christmas, such as wreaths, candles, feasting and gift giving.

St. Nicholas was identified with the pagan deity of Odin, who visited children with his eight-footed horse, and because it was hungry, they had to have their boots full of straw near the chimney or fireplace. The Christmas tree was meant to honor Odin, the Norse God. It would have been hung with the sacrifice of nine animals. Kissing under the mistletoe was one of the pagan rituals observed around the winter solstice. Holly and ivy are pagan symbols of rebirth and fertility of spring. Santa Clause is Odin or Thor, who was thought to visit once a year and leave presents for good children, in their shoes.

It’s absolutely mind blowing how fake most Christians are celebrating stupid pagan holidays and turning the birth of Jesus Christ into a materialistic shit show of douche baggery. (Even though scholars believe Jesus Christ was actually born around June.) Hanging balls on the pine shaft to celebrate fertility and their pagan gods while pretending it has anything to do with God or the Bible. In fact, anyone that reads Jeremiah 10 can clearly see the Bible is 100% AGAINST Christmas in it’s entirety. Why don’t the pastors preach on this chapter on Christmas day? You’re being played for fools by the pagan infused Catholic Church. 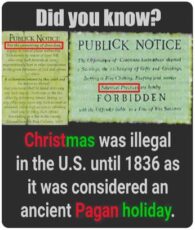 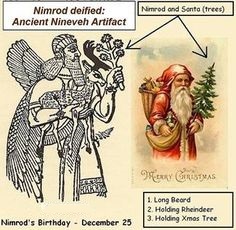 “Hear ye the word which the Lord speaketh unto you, O house of Israel: Thus saith the Lord, Learn not the way of the heathen, and be not dismayed at the signs of heaven; for the heathen are dismayed at them. For the customs of the people are vain: for one cutteth a tree out of the forest, the work of the hands of the workman, with the axe. They deck it with silver and with gold; they fasten it with nails and with hammers, that it move not. They are upright as the palm tree, but speak not: they must needs be borne, because they cannot go. Be not afraid of them; for they cannot do evil, neither also is it in them to do good.

Forasmuch as there is none like unto thee, O Lord; thou art great, and thy name is great in might. Who would not fear thee, O King of nations? for to thee doth it appertain: forasmuch as among all the wise men of the nations, and in all their kingdoms, there is none like unto thee. But they are altogether brutish and foolish: the stock is a doctrine of vanities. Silver spread into plates is brought from Tarshish, and gold from Uphaz, the work of the workman, and of the hands of the founder: blue and purple is their clothing: they are all the work of cunning men.

But the Lord is the true God, he is the living God, and an everlasting king: at his wrath the earth shall tremble, and the nations shall not be able to abide his indignation. Thus shall ye say unto them, The gods that have not made the heavens and the earth, even they shall perish from the earth, and from under these heavens. He hath made the earth by his power, he hath established the world by his wisdom, and hath stretched out the heavens by his discretion. When he uttereth his voice, there is a multitude of waters in the heavens, and he causeth the vapours to ascend from the ends of the earth; he maketh lightnings with rain, and bringeth forth the wind out of his treasures.

Every man is brutish in his knowledge: every founder is confounded by the graven image: for his molten image is falsehood, and there is no breath in them. They are vanity, and the work of errors: in the time of their visitation they shall perish. The portion of Jacob is not like them: for he is the former of all things; and Israel is the rod of his inheritance: The Lord of hosts is his name. Gather up thy wares out of the land, O inhabitant of the fortress. For thus saith the Lord, Behold, I will sling out the inhabitants of the land at this once, and will distress them, that they may find it so.

Woe is me for my hurt! my wound is grievous; but I said, Truly this is a grief, and I must bear it. My tabernacle is spoiled, and all my cords are broken: my children are gone forth of me, and they are not: there is none to stretch forth my tent any more, and to set up my curtains. For the pastors are become brutish, and have not sought the Lord: therefore they shall not prosper, and all their flocks shall be scattered. Behold, the noise of the bruit is come, and a great commotion out of the north country, to make the cities of Judah desolate, and a den of dragons.

O Lord, I know that the way of man is not in himself: it is not in man that walketh to direct his steps. O Lord, correct me, but with judgment; not in thine anger, lest thou bring me to nothing. Pour out thy fury upon the heathen that know thee not, and upon the families that call not on thy name: for they have eaten up Jacob, and devoured him, and consumed him, and have made his habitation desolate.“ – Jeremiah 10